When I wrote the first Betty & Cat bilingual children’s book five years ago in Dutch/English, there was only one other book like it out there, and that was for babies. There were lots of bilingual books, yes, but they all featured a translation, with the story told in both languages side by side. Betty & Cat is really bilingual, since each critter speaks his or her own language. Today, there are four book series like mine that I know of – three of which, like mine, are self-published. 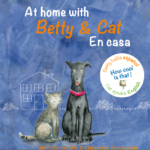 Just before Christmas, I sent my first two books to Cuba – a Spanish/English version of Home and a Spanish/French version. In the last five years, I’ve sent books right around the world. Early adopters have been very encouraging and have spread the word. But this was the first time I’d sent books to Cuba.

My sister-in-law in Atlanta bought a Spanish/English book for everyone in her grandson’s first-grade class. Half are latino, half are anglophone, and this way, everyone’s on the same page (pardon the pun!)

The more I meet young readers of my books, the more I’m convinced that this is the way to go. No one has the patience to read the same thing twice; kids are so smart: they don’t need you to tell them what you just told them – they can figure it out, even if they don’t know the meaning of every word.